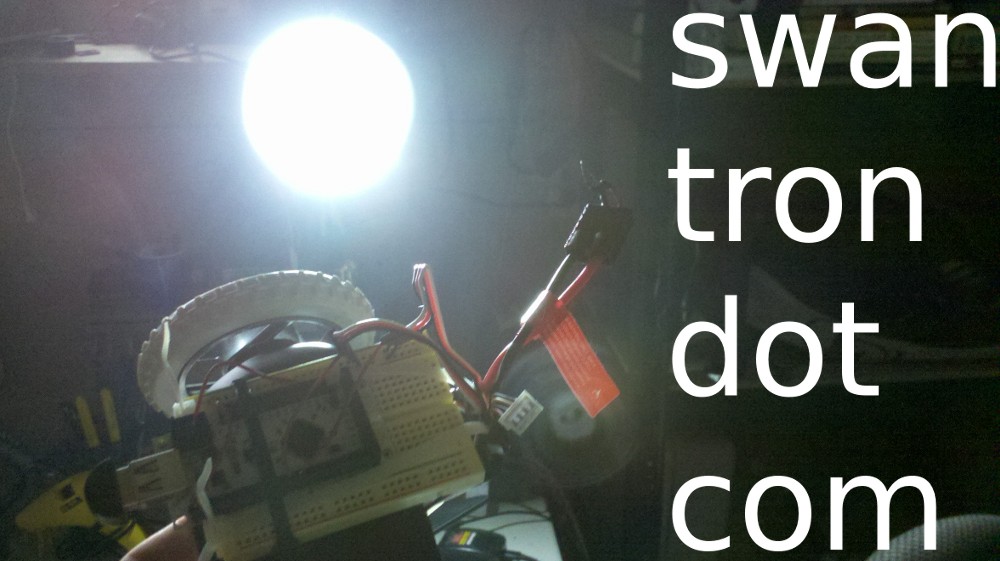 Close call with the new 3-cell LiPo. It took some time to get the singed plastic smell out of the *lab…all three cells appear to be intact.

Making progress on the IOIO project, before the setback.

I spidered my D2 a handful of weeks ago. The replacement phone I received shipped with Gingerbread…which with my previous version of CyanogenMod was built on top of. I rooted the new device immediately, and dumped all of the garbage apps. My thought was to keep the stock ROM on the device, in order to have a stock testing device once I moved on to a new device.

Well, even stock Gingerbread is borderline useless by comparison. The most annoying tic that developed was with the camera…the flash stopped syncing with the camera shutter, rendering the flash useless.

I falsely assumed that flashing a ROM would work the same on Gingerbread as it did on Froyo for the Droid 2. Way wrong…I honestly thought I had bricked the phone. I ended up having to get creative with ADB and flashing an older firmware version, and standing Froyo back up on my device. From that point, it was the same old song and dance…testing ROMs, pulling batteries, hanging out on the recovery screen.

I wound up settling on an old nightly build of CG7.1. I am due for a phone upgrade right now…my wait for ICS is way more tolerable with a usable phone.

I have to admit that I’m pretty impressed by the Foscam’s IR capabilities. I snapped a screenshot on my Droid last while we were getting the princess ready for her bath…


The lab was light-free, and I was connected to the camera’s web server via my 3G connection. Controls are fairly snappy, and the image looks good even when pushed via cellular. Response time is very quick on the network itself…but remoting in to the router does the trick nicely.

I’m keeping my eyes peeled for a second cam…set designated choppable. We’ll see…I’m growing attached to this guy, but really want to get into its guts.


The price of IP webcams has dropped to a pretty ridiculous level. My cheap little Foscam can handle audio and has eleven sweet little IR LEDs for nighttime footage…should have taken this route over the Samsung baby monitors, hindsight being what it is.

I configured my router and have this cam connected to my home network wirelessly, so I can access via my router’s URL, the local network, or via free apps on my Droid or Katie’s iPhone. Sort of ridiculous. Full pan and tilt controls and the works.

The further beauty of this IP dude is full hackable controls. In addition to the IR LEDs (eleven indicating a decent amount of juice) on this unit, there is a light meter, speaker, microphone, and two servos. All triggerable with this thing’s API over WiFi. I just need to find some time…this thing is sweet.

A whole bunch of Dremel work and some hot glue…

The Clocky conversion to servo motor control is mostly done.

Getting close. I determined that the IOIO board will not fit inside the casing, so I will have to come up with an external mount. Which will change the balance, so I might end up having to add some counterweights for balance. It should shape up, mechanically, in another garage session or two. The UI work will be another session, thereafter, but look for a finished product within the next week or so.

For a project that is being tackled in five-minute-sleeping-baby sessions, it is shaping up. I am not quite sure if the IOIO board will fit in the enclosure, but it will sure be close. I suppose if all else fails, I can chop the thing up a bit…as much as I enjoy Dremel-ing, I’d like to avoid that if possible. Maybe next five minute session…

Impatiently awaiting my Dremel from Amazon, I made an executive decision that Clocky’s bright orange motif had to go. Clocky already had some big rims; sort of like my SS. Sort of too like my Yukon. Hmm…black and chrome…sort of a no-brainer.

Much better. Hoping to have the little guy rotary-drilled and souped-up before too long. Check back in soon.

My conversion from DC motors to continuous drive servos is going to be a little more involved than first assumed. The idea is to keep the speaker, upgrade the drive-train, and re-purpose some buttons for power and possible function modes. Oh, and perhaps the toughest item…enclosing the IOIO itself…without nuking the bluetooth function.

It became quite clear that I need to gear up before proceeding.

Shipped and on the way…hoping to get a chance this weekend to get my grind (and glue) on.

A while back, I put together a project that added remote control via an Android. I broke out the leads to the DC motors that were existent, and left the structure largely intact…resulting in a monster of a build.


I would like to clean the build up a bit, but to do so will need to go with a different approach. I am looking into gutting the existing components entirely, and implementing continuous drive servos as my powertrain. This will likely get messy.

Servo motors will add big gains in the power consumption realm, and provide added control. I am not looking for speed, so I think this option might work out well. Stay tuned…

Before the rugrat showed up, I managed to make some progress on my next project. I just realized that I hadn’t put together a teaser post, hence this quickie.

I started thinking about how to make a better UI to control my remote control via Android project. Instead of going with a touch base, I figured I could implement control utilizing the on-board orientation sensors.

This ultimately led to figuring out how to break said values out…a la this little app:

I wrote a simple app that dumps the sensor values of each x, y, and z axes, for values between -90 and +90 degrees.

The next step would to be to clean up the display, provide some visualizations, (graph-ish perhaps) and use the values to control something physical. No promises on the timeline, but if it gets to be too far out, I will dump this code on GitHub for general public perusal. Back to diapers…